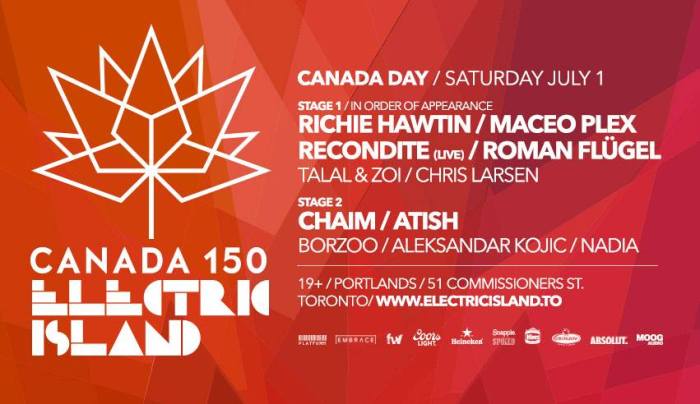 Electric Island returns for a very special Canada Day edition on July 1st, celebrating the 150th anniversary of the great North with a massive star studded lineup. With the actual Toronto Islands still flooded from a volatile summer in Toronto, the Portlands, located right off the water at 51 Commissioners St., is the perfect venue to bring that island feel back to Electric Island.

This time, on the second stage, Electric Island hosts the likes of Chaim and Atish. Both of these guys have an eclectic deep and melodic sound, which will be perfect to bring that intimate vibe to the smaller stage. Opening up for them is the Cabal resident crew, which consists of Aleksandar Kojic, Nadia, and Borzoo. If you’ve ever attended a night at Cabal, you’ll know these guys are special. We can only imagine how riveting their sets will be with them playing consecutively, feeding off the energy of one another.

As for Stage 1, event organizers went the extra mile for Canada’s 150th. Roman Flügel’s massive remixes and original tracks have been present in almost every Electric Island show for the past five years, so having the producer there for a set will be a real treat. Returning alongside Flügel is Recondite, who was a crowd favourite from last year. To end the night off, Electric Island is hosting not one, but two, megastars; Maceo Plex and Richie Hawtin. Maceo Plex’s production is regarded as one of the best in the world, and he has taken the honour of Resident Advisor’s Top DJ of the Year an unparalleled three times. Whereas Richie Hawtin, a fellow Canadian, is a techno icon and legend who is attributed to single handedly pioneering the sound of minimal techno.

The event starts at 1PM, and this is definitely not one to miss. Bring your friends, your vibes, and your presence, and celebrate the 150th of this beautiful country with another great party at Electric Island.