Mark your calendars! AIM Electronic Music Festival, a 3 day camping experience with over 50 artists, is back in its third consecutive year over in Montreal, Canada on July 14, 15 & 16!

AIM – which stands for “Art – Innovation – Movement” was first organized in 2015 to breath new life into the traditional festival formula. Located about an hour outside of Montreal’s downtown core at Parc Carillon, the event is designed as an immersive experience featuring interactive multimedia art and digital displays.

Toronto is spoiled with some of Canada’s largest and well-known music festivals.  Despite their success, they have recently failed to deliver unique artists, settings or experiences. With many festivals recycling the same line-ups, inflating ticket prices or being cancelled all together our city’s festival-goers are left with few options. Luckily, our French Canadian neighbours have organized an electronic music festival completely unique to any other in Canada. Instead of relying on gimmicks and cookie cutter line-ups, AIM offers a less pretentious setting plus a variety of international and local acts rarely seen at Canadian festivals.

What also makes AIM stand out is its GREEN MOVEMENT: Have a good time without destroying the environment. AIM will implement several initiatives to respect the environment, such as a reusable cup program, public compost bins, reducing carbon footprint, and an on-site water fountain. In fact, AIM will also integrate a new green initiative which encouraging attendees to turn in a piece of garbage such as an empty bottle or empty cigarette pack to the AIM Green Booth in exchange for a gift.

This year’s stunning line-up features over 70 artists, both DJ’s and live groups, on four stages. Artists include Lee Foss, Guy J and Jon Talabot plus live sets from Âme and Henrik Schwartz. Also featured are local acts such as Thomas Von Party and Stereo resident, Monitors. But AIM offers more than just 32-hours of non-stop music. During the 3-day event you can take part in a variety of educational and artistic workshops, refuel at a local food truck or just chill out and play a game of soccer in the camping area. With so many options its no wonder AIM has emerged from its humble beginnings to become one of the most up-and-coming festivals in Canada. 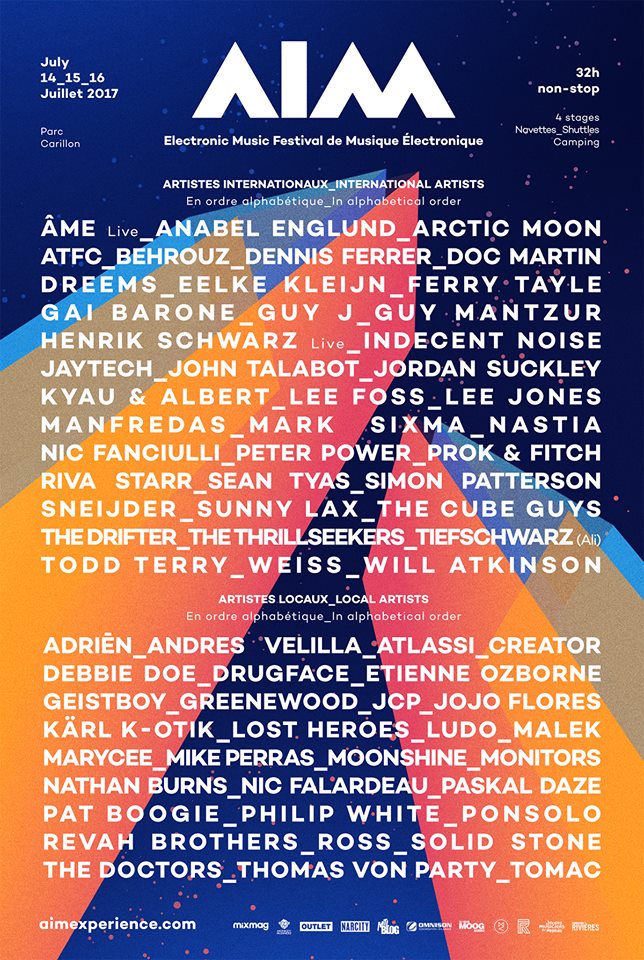