By Kaivan Adjedani, Senior Editor. Inflatable churches, love parades, drag queens conducting weddings; is there anything not to love about Bestival? ITC left it up to senior (also known as sassiest) writer Kaivan to find out. Check out some memorable moments below. Spoiler: Bestival made Kaivan’s heart grow three times in size. 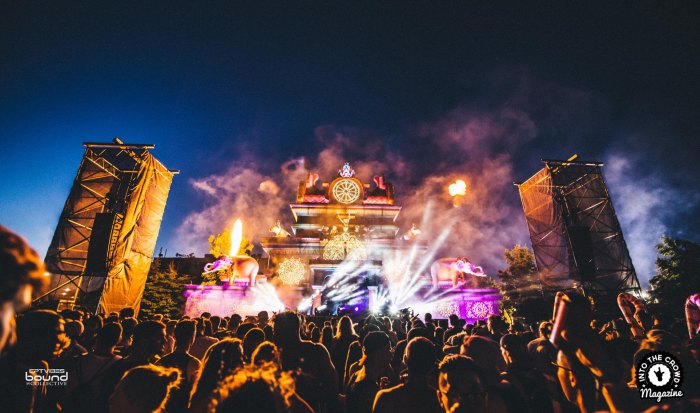 Playing in an outdoor venue, especially at a festival, brings out a certain sound in DJs. Free from the lights, fog, and darkness; festivals allow them to explore their upbeat, bouncier, and lighter music catalogue that wouldn’t quite work inside a nightclub. The Bollywood Stage headliners took full advantage of this, as they threw out fresh summery basslines and vocals that had the crowd jiving, grooving, and moving straight into the sunset. Special mention goes to Joris Voorn for day one, and Catz N Dogz on day two.

When Bestival was first announced, people scoured through the galleries from the UK festival trying to get a taste of what was to come. Expectations were high last year, yet the two day festival still went above and beyond them. As soon as you were searched by security and lead in past the gate, it took less than ten seconds for your face to crack a smile. Bestival was back in Toronto, I had to say it out loud to fully appreciate it.

While Saturday night’s After Party at CODA was a bit of a let down (no Maya, no Joris, no Art Department), on Sunday night, CODA returned to their usual excellent standard of bookings and parties by having Dubfire close the weekend. It was magical. It was amazing. It was CODA.

Festival season has been quite nice to Toronto so far. Most of events have fallen in the mid 20°C, hot enough to bust out shorts but cool enough to avoid a sweat. Saturday, Day 1 at Bestival, was extremely hot. High thirties mixed with alcohol and dancing… Well, you do the math. Thankfully, Bestival grounds had accessible water stations which were vital to the majority.

Somewhere In Between: Art Department

Subjectively speaking, Art Department played a great set. I loved it. However to write for an outlet called Into The Crowd and praise a set that literally made half the crowd disperse would be a bit biased of my musical opinion. Would I go as far as to say the demographic didn’t understand the music enough to appreciate? Yes. Would I say Art Department played music appropriate for this festival? Maybe not. While I can respect Jonny White’s decision to not water down his music to suit more commercial fans in attendance, it still was Bestival and not an Art Department show. Playing festivals, one often needs to cater to and better suit their audience. In conclusion, when it comes to performing shows, Jonny prefers quality over quantity.