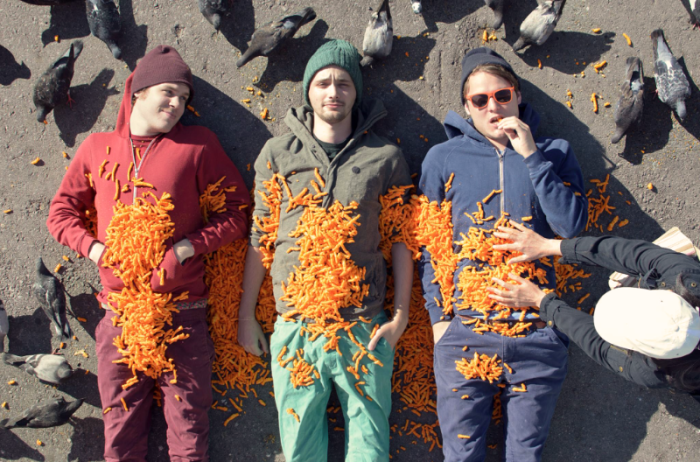 Into The Crowd talks with Toronto band Shy Kids about their latest release Lofty!, their artistry, and future endeavours. Lofty! is available on iTunes now.

1) How did you guys come together as a band?

We met in University at a talent show. We played “Baby Got Back” and won. Since then we haven’t really looked back.

2) Can you tell us a bit about Shy Kids? How would you describe yourselves to someone who may not know you?

3) In 2013 you won a TIFF award for best short film. How did your film and music endeavours intertwine?

We had always been in a band before Noah and TIFF. Luckily making a film and making a song aren’t that different!

4) How does being from Toronto, more specifically the artistic Kensington area, influence your work as artists?

Toronto is having a renaissance. Look at the charts. Look at the most famous actors. Toronto is setting the trends for the rest of the world to follow…just ask Drake. As for Kensington that just seems to be the part of Toronto that is most suited to our personalities. It’s eclectic, laid back, great food, great bars, people having acid flashbacks, Rastas, bottle ladies… It’s just this central area where all the freaks hang out.

5) Talking a bit about your album, what was the inspiration behind Lofty!?

Lofty! is a play on words that is talking about both the albums ambitions and the place it was made. All three of us lived in this one bedroom loft and it’s the claustrophobia and the bond of that experience that was the driving theme of the work.

Ego. Whenever you are doing something creative you always want to see your vision expressed and it’s very hard to filter that through three people. You have to find out how to record, how to structure a song, what to cut, what to keep. But all of that gets easier when you can check your ego.

7) The ®ockets video had an interesting and unique concept. What was the thought process that lead to creating an all Candy music video.

We had the song done and ready to go and were sitting in a health food restaurant talking about candy. Without giving too much away we think there is multiple metaphors that candy has. It’s this bright, colourful, poison that tastes so good but is really not great for your body. We then started to think what if the whole world was made up of candy and vice. Then nine months and six hundred dollars in candy later…we had the video.

8) Do you have any new exciting music videos in the process at the moment?

Terminally In Love With You is our second single and it has a live video we created with a huge Choir! at a church. We always have something up our sleeve for other ideas…stay close.

9) Last question, what’s next for shy kids in either film or music or both? We’re sure it must be hard when you’re diverged in so many different realms of art.

We have the most fun job in the world. It’s not always sunshine and lollipops but you will see more music/film/books/TV/boardgames/apps/and whatever else the universe has in store for us very soon. We have an EP called America coming out soon.

You can check out Lofty! and other albums by the Shy Kids here on iTunes.