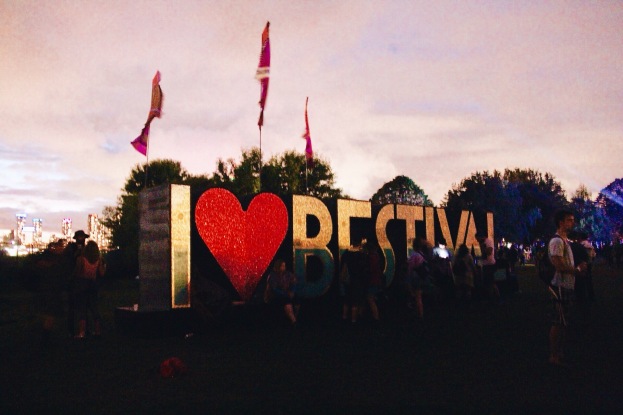 On June 12th and 13th, the original UK award-winning festival BESTIVAL made its North American debut right here on Toronto Island. A creative wonderland set upon the iconic and picturesque Hanlan’s Point Beach, and with a multitude of special attractions such as the Bestival Inflatable Church, Circus Troupes and Custom Party & Parade – and not to mention the impressive music artist lineup – this event was sure to be one of the summer’s best festivals (ha!).

Among the Bestival Toronto performers, a collection of electronic, techno, hip-hop, and indie rock artists over 5 different stages, were Florence and The Machine, NAS, Flume, Caribou, Flosstradamus, Robin Schulz, Jamie Jones, ZHU, Clean Bandit, Wavves, Jamie XX, Rudimental, Keys N Krates, Bakermat, Grandtheft, Skream and more. While the cloudy and partially gloomy weather dampened the attendance and excitement of some festival-goers on Friday, bright and sunny Saturday was an exponential thrill. Check out some of the staff highlights below!

The beach was no doubt a crowd favourite during the beautiful weather on Saturday afternoon with a giant line-up to get inside by later in the day. Luckily, I was able to beat the crowd and lounge in the sunshine while Rob Da Bank, Bestival’s founder, played a chill disco set which lead to one of the liveliest crowds I have ever seen at a festival in Toronto. It’s rare at music festivals for people to move past the artist worshiping and truly just enjoy the music and setting but the Balearic Beach Club managed to pull this off flawlessly. With little known DJs, great weather, and an even better crowd the beach was one of the best lounge spots I’ve ever been to at a Toronto festival and one that the city rarely gets to experience.

DJ Tennis
It’s no secret that Toronto is home to some of the biggest tech-heads in the world and DJ Tennis was able to bring exactly what the crowd at the Bollywood stage was looking for on Saturday.  Although he is not widely known by his own moniker he also holds the title of founder of Life and Death records, who’s catalogue includes releases some of the biggest names in techno including Pan-Pot, Tale of Us, and Recondite.  He brought a heavy and high energy set to the island on Saturday and continued well into the Sunday morning at the CODA after party. DJ Tennis is not a name Toronto regularly sees on its roster but he gave the crowd exactly the sound they were looking for and had yet to receive at Bestival.

Food
I made a point of not eating lunch before going to the island each day just so I could have extra room to check out the local food stands.  There was everything anyone at the festival could ask for, from shawarma to cold pressed green juice to donuts – you name it, they had it.  While the lines for the ferries may not have been ideal, the vast quantity and well spread out food vendors ensured that you weren’t waiting very long to eat (although maybe pricey). They even had a fruit drink stand where you could get an entire coconut, pineapple, or watermelon hollowed out and blended to drink.  Although it technically focuses on the music, Bestival could have easily been considered a food truck festival over the weekend.

Bestival Inflatable Church
Bestival’s infamous inflatable church made its way across the Atlantic and was one of the most unique attractions of the weekend.  It hosted real and “just for fun” wedding ceremonies and featured a crazy congregation including a British minister who also served as MC.  The two DJs ensured the church was always bumping with throwback hip hop and pop making it one of the liveliest parties on the island and a great place to escape the rain on Friday.

The beginning of Nicole Moudaber’s set
While Nicole Moudaber’s entire set had the Bollywood stage buzzing, the beginning was what had the true music fans intrigued. As opposed to big room techno, Nicole started off with a dubby, more structured type of set that would usually be reserved for big stages like Space Ibiza and Sonar in Europe. Apart from starting a truly remarkable performance off right, the choice in music also reflected just how seriously Nicole Moudaber takes Toronto as a booking – playing a set that only few cities in the world would be privileged to hear. 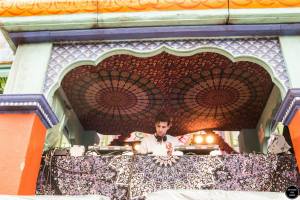 This booking caused the most division among fans looking to spend the majority of their Bestival at the Bollywood stage. Half of the audience consisted of people who had seen Jamie XX the prior summer at Electric Island, therefore well aware of his mixing abilities behind the decks. While others more (only) familiar with his electronica productions saw this booking more suited for the Bacardi big top tent, or potentially even the main stage. Regardless of any opinions beforehand, Jamie XX within minutes of performing made it evident that the young lad could keep up it with the other producers sharing the stage. Signature funk house, monster hit “Sleep Sound”, a trench created by the dancing of the crowd; it even seemed as though he had given them a run for their money.

Paco Osuna
No Paco, no party. This expression accurately sums up about every techno festival in the world, with very few lineups excluding the Spaniard’s name. However with the quantity of shows Paco plays, the quality of his music has still never altered. This idea was reinforced for Toronto as the techno powerhouse threw out an arsenal of heavy and unique basslines, taking Toronto through a set that could only be experienced when the very few in Paco Osuna’s tier come to town. Many in the crowd had seen Osuna perform up to ten times in the past, and would see him perform ten times again. There’s one expression that accurately sums up Paco Osuna – he always delivers.

Jamie Jones
The house icon created a masterful performance of art; the lights, the music, the energy – all coming together as one. Jamie Jones, the mad genius curating the electric orchestra to put on one last performance, the entire spectacle rivaled that of an Olympic closing ceremony. Showcasing his versatility Jones played bouncy, dark, deep; house then techno, as if he were a deranged scientist throwing random solutions into a melting pot of brilliant music. There would have been no other way to end Bestival – Jamie Jones smirking behind his masterpiece, and the crowd slowly leaving the island in a state of bliss.

Matoma’s double Bestival booking
Saturday Bestival-goers were given an opportunity to catch rising Norwegian nu-disco/tropical producer Matoma perform not once but TWICE. Catching his Big Top stage set after witnessing him kill his Toronto debut at The Hoxton back in November was just as it is a total treat. Although a mid-day performance, the stage tent filled quickly throughout his set and the crowd was constantly cheering. When he closed with his Platinum-renown tropical remix of “Old Thing Back”, the crowd roared crazy loudly and danced incessantly as feels rushed through everyone’s body. Fans also went wild for Matoma’s remix of Axwell’s “I Found U” – my personal favourite of his. Walking through the Bestival grounds to the media area with Matoma after his set, many recognized the happy music producer and begged for a photo with. There was just so much joy in this hour that I, along with many other fans, had to catch the round 2 set at the Perrier Greenhouse later that night. All around, Matoma’s music is always a pleasure no matter the place, time or day. 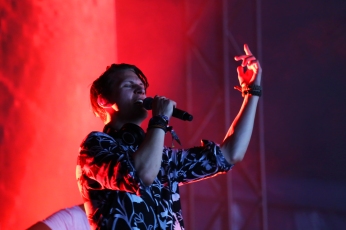 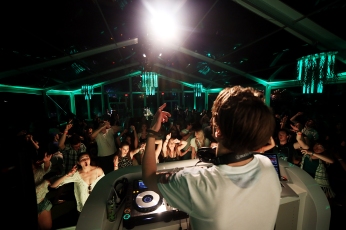 Grandtheft keeping it 100
With his custom club sound and pleasurable trap beats, Grandtheft is arguably one of the best Canadian live DJs around. After having first seen him working photography at a club in Kingston, Ontario last year, he immediately became a favourite electronic dance music club act of mine. As witnessed yet again at Bestival, but to a much larger crowd, Grandtheft’s seamless combination of bouncy, trappy and infectious beats had everyone feeling alive and energized – it was nearly impossible to stand still. 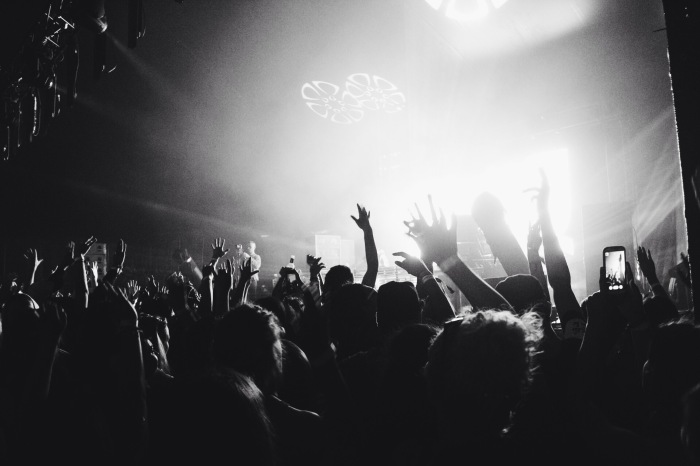 Flosstradamus closing Big Top Day 1
I don’t listen to these guys on the regular, but the buzz about crazy duo’s live show had me longing to catch them in real life for a while. The crowd came out to the Big Top stage in full force Friday night and I don’t think anyone in the room wanted their set to ever end. Heavy bass and trap beats, a contemporary blend of electronic and hip-hop – the raging performance by the duo in full white and bulletproof vests, J2K often spinning behind the decks and Autobot standing above crowd-pumping, was the perfect way to close Day 1 and make up for an okay Friday.

Young local Toronto producer Harrison had been gaining a lot of acclaim in the city over the past few months, so when I found out he was a part of the festival lineup, naturally he was on my must-see list. His set was early on Saturday and didn’t bring in much of a crowd, but that surely didnt deter the quality of his set. Especially this being his first festival, I found his set accompanied by local vocalist Maddee and fun video game visuals super cute and dancey. I wish it had lasted longer and the room had filled up a bit more. Looking forward to seeing him host his own show at a more intimate venue next time.

Bonus: The Cuban Brothers
Because they were just so hilarious and unique and really drew in a crowd of people and smiles mid-day.

Check out a short video from Bestival we put together below!