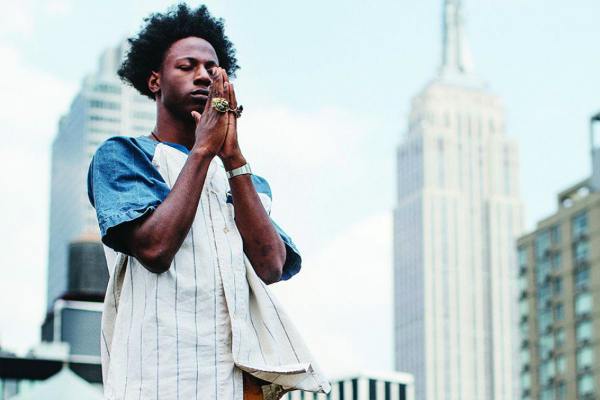 By Boris Boitsov. Saturday, May 9th proved to be an action packed night for Canadian Music Weekat the Danforth Music Hall. With local Toronto talent Jazz Cartier warming up the night and one of the most sought-after underground hip hop artists in the scene, Joey Bada$$, blowing the roof off of the iconic Toronto concert venue – it was a Mother’s Day Eve that your innocent baby-boomer mama probably wished you weren’t planning to go to.

Jazz Cartier started things off strong, performing some of his main tracks like “Switch” and “New Religion”. Later he slowed things down to show us his lady-loving alter ego Jacuzzi La Fleur, with tracks like “Count on Me”. Jazz Cartier captured the crowd with his haunting energy and showed us his unique take on rap rhythms. His affection for the crowd was clear from the get-go and overall, this local genius delivered a stellar opening set – definitely one of Toronto’s freshest and fast-rising underground artists whom all hip-hop/rap listeners should keep an eye on.

With a solid close to Jazz Cartier’s set and the stage ready for the man of the hour, the lights dimmed, the mood focused, and the familiar intro of DJ Statik Selektah started lighting up the crowd…

Brooklyn’s Mr. B4D came out flowing with the first track off of his latest album, B4.DA.$$, titled “Save the Children”. The crowd didn’t hesitate to get into the vibe,with many of the young twenty-somethings jumping in to rap along. The man’s talent for owning the stage was demonstrated through well-timed pauses to his setlist and rap-alongs of popular hooks. Amped and in the moment, Joey highlighted the night with bangers like “Christ Conscious” and “Hazeus View”. The show peaked with Joey paying respect to the passing of his close friend and fellow Pro Era member, Capital STEEZ, which led the crowd to raise our lighters and honour him with a moment of silence.

Joey Bada$$ proved to easily be one of the most electric rap shows I’ve ever attended. The twenty-year-old bleeds talent. His ability to engage the crowd and entertain his fans was demonstrated impeccably. I’m definitely looking forward to his return to the 6ix.