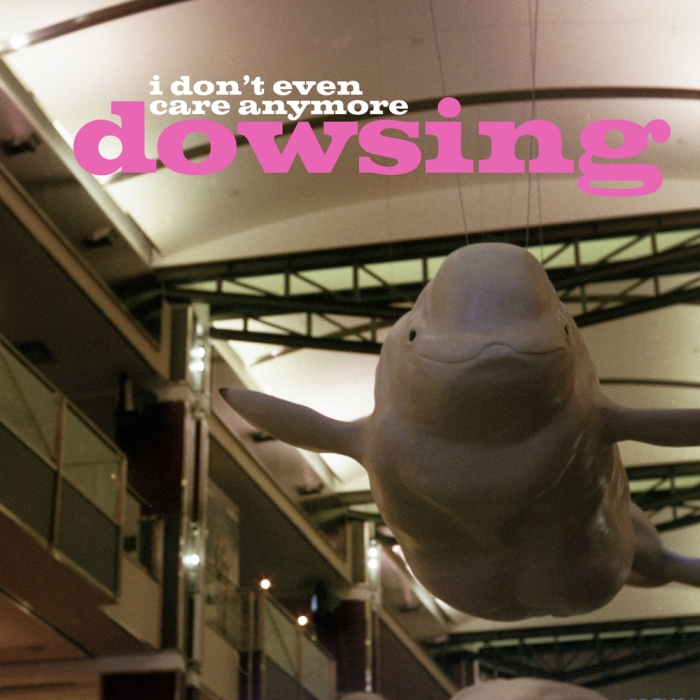 I Don’t Even Care Anymore is an album I’ve listened to a lot. I recently got into Chicago’s Dowsing after hearing about them everywhere and listening to It’s Just Going to Get Worse on the Count Your Lucky Stars bandcamp. This album shows off the poppier side of emo (whatever ‘emo’ means, someone will always be there to tell you your definition is wrong, but I don’t even care anymore). I heard once in an interview, singer/guitarist, Erik Czaja describe the album as him just “crying over one person” and I’d say that’s a pretty accurate summation of it.

The opening track, “If I Fall Asleep the Cats Will Find Me,” sets up the album with a question and an answer. The lyrics “Will I make it through you? I need to and I will,” are what the entire album is about.  I really love that the question gets answered instead of remaining open ended. Dowsing has this great gift of writing really sad but simultaneously uplifting songs. Even when you’re unsure about what you’re going to do and you’re not feeling well, it’s important to tell yourself that you will be better and that life goes on because it has to and you have to move with it.

The next few songs are all more upbeat musically, but just as sad or even more sad lyrically. Take “Get Weird” for example, which documents Erik watching his relationship fall apart and takes its title from the lyric, “It gets weird sometimes when I say ‘I love you.’” “Where’re Here to Basketball” is a self deprecating song with my favorite song title of the album.

“Meant to Shred” and “I Don’t Even Care Anymore” go hand in hand for me. This album seems like a fairly chronological account of the singer’s relationship falling apart, ending and him finally moving on. The way I take it, he gets broken up with in “Meant to Shred” and in “I Don’t Even Care Anymore” he’s convincing himself that he can be happy, function and get on with his life after they break it off.

“Everything Falls Apart” brings a nice break in the album. It’s a very pretty and sad, slow piano based song where Erik is thinking back to all of the good things and missing the person who left him. The music completely matches the reflective nature of the lyrics.

He’s especially down on himself in “No Offense to the Fun” and “Ferret Feelings” in which he sings, “I can’t remember the last good thing that happened to me” and “I’ve just become disgusted with how I’ve been” respectively.

“Still Don’t Care” is another slow song. Delia’s keyboard playing sounds beautiful in this one. It’s also the least depressing track on the album. I love the second half of the lyrics that go, “I bet you never saw this coming, a strength I’ve only just possessed- writing songs with emotion and you were never a part of them.”

The album ends with “Nothing to Give.” Erik’s lyrics on this are extremely detailed and heartbreaking. It’s probably the biggest song on the album and it’s a very strong way to wrap it up. My favorite part is when the music gets pulled back and Erik and Delia sing “I’m always drunk and miserable since you came” together.

I Don’t Even Care Anymore is an amazing album full of upbeat sad songs that I really think everyone should at least give a listen to. (By Nathan Cornell)