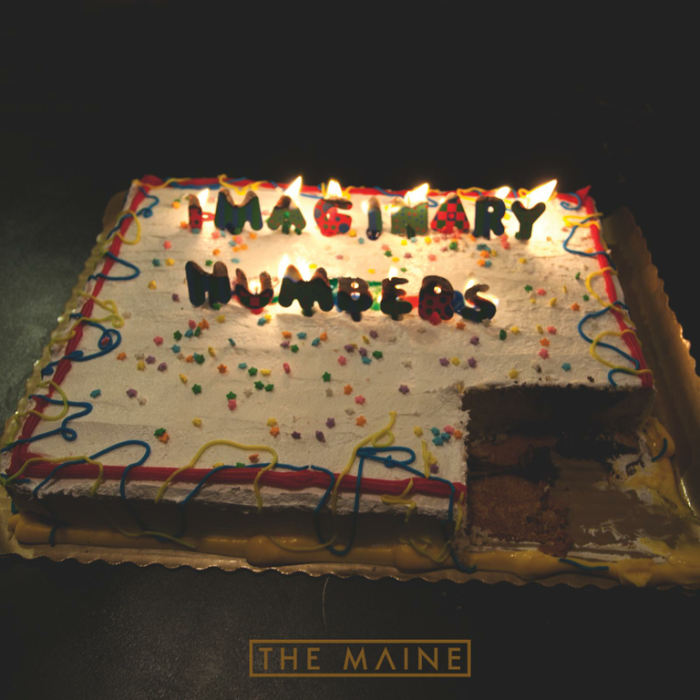 By now, you’ve probably at least heard of The Maine. In their six years of being a band, they’ve released four full length albums, seven EPs, a few Daytrotter sessions, have been featured on many compilation albums, signed to a major label, left the label, created 8123 and have done a crazy amount of touring. Earlier this year, they released Forever Halloween and are now back with their new acoustic EP, Imaginary Numbers which they funded, recorded and released on their own.

Many bands release acoustic EPs. They’re usually reworked versions of old songs and sometimes seem cliché and lazy at this point. The Maine doesn’t fall into any of those categories though. Imaginary Numbers is made up of all new original songs. As with every release The Maine has done, it shows a new/different side of the band’s sound.

“Raining in Paris” begins the EP. It’s a song that is very reminiscent of Ryan Adams. O’Callaghan’s honest and raspy voice is as good as ever- when he hits the high notes, it sounds like a heart breaking. The light organ and percussion are a great touch to the song. The song sounds just like the title.

Up next is “Room With No Windows” which has a very jazzy, lounge, coffeeshop vibe to it. O’Callaghan sings about wanting change because nothing’s going to get better if he’s just sitting around letting his thoughts consume him. Monaco throws some nice little guitar licks over it and the bass line is great.

“Perfectly Out of Key,” is a piano ballad that reminds me of “These Four Words” from Forever Halloween. This song was recorded in one take with O’Callaghan singing and playing piano. “Perfectly Out of Key” has my favorite set of lyrics on the entire EP, especially this line- “I’m not allowed to be anyone else but me, so I try to take apart my head from time to time.” There’s a little bit of electric guitar at the end and possibly pedal steel or feedback- I’m not sure- that add a nice swelling dynamic to the song. In between this and “Visions,” there is a small piece of “These Four Words” that plays muffled where you can hear O’Callaghan sing, “I don’t love you.” I love that they threw that in there.

Second to last is “Visions.” It’s another song with a Ryan Adams feel to it- it sounds like it could be an outtake from Heartbreaker, but still obviously The Maine. Notable parts of this song include Brock’s high harmonies in the chorus- they sound amazing- and the harmonica which, I believe was played by Monaco, that keeps the song from feeling droney and long.

Imaginary Numbers finishes off with the longest song The Maine has ever recorded and released, “Lovely Sad.” Imaginary Numbers takes its name from the second verse of this song that goes, “Imaginary numbers control the ones we love.” It’s a sad song, but also a very calming song and that fits very well with O’Callaghan singing about lovely sadness. The Maine did a really good job matching the mood of this song with every part of it.

The great thing about The Maine is that they always come back with something new that will bring them new fans, but their progression is so natural and honest that it doesn’t alienate longtime fans. Imaginary Numbers is a mostly sad album (sad is a completely relative term), but John O’Callaghan wears the sad song very well. If you’re into stripped down rock ‘n’ roll, you need to listen to this. (By Nathan Cornell)

Listen to “Visions” below: