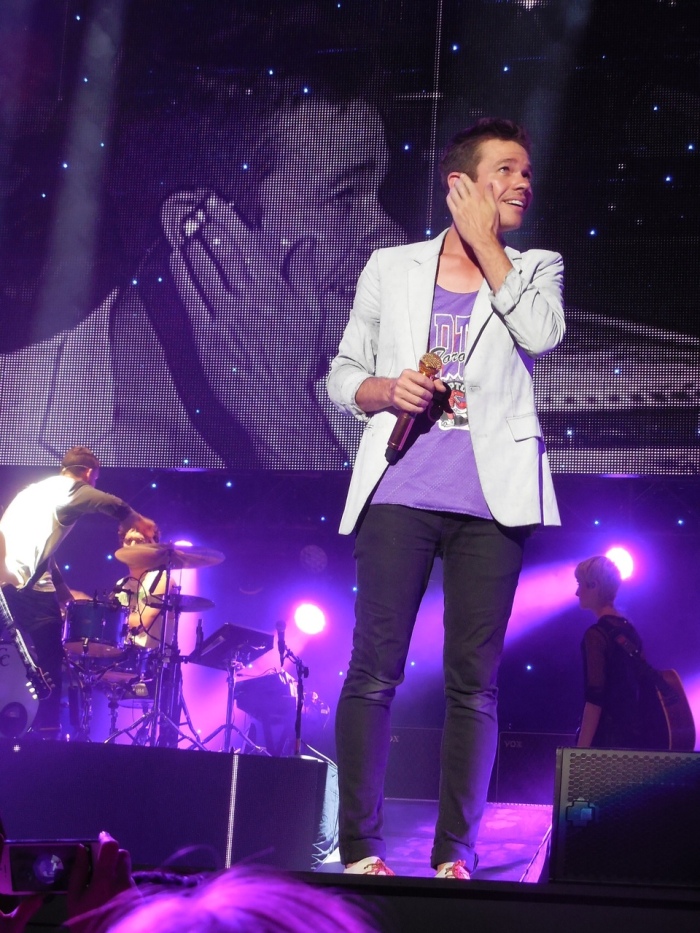 Picture this:
You’ve worked hard to make music since you were young, since 2001 with a group of few of your old friends, because music has always meant something special to you. That group split, and you’re with a couple of new guys now. You guys click and make an album. You tour a lot and continue to work hard.It’s 2013 now, you won two Grammys and you still haven’t stopped touring since your sophomore album came out, but you’re finally back in the States after touring everywhere else. It’s your last tour before you go home to write album number three. The venue you’re playing tonight holds 8500 people, and you sold it out for two nights in the same weekend.

After riding the wave of the their recent success, fun. has commenced the Most Nights Summer Tour, the last in support of their sophomore album, Some Nights, which debuted in February 2012. As part of the tour, the band played two sold out shows at the Greek Theatre in Berkeley, California.

The show started off in the dark, a single spotlight shining to draw attention to Nate Ruess, Jack Antonoff, and Andrew Dost huddled in a corner, dressed in suits much like in earlier promotional photos for Some Nights. Ruess sang the quiet and reflective “Some Nights Intro,” belting out those final words with an air of bravado and theatricality before the lights went out again.

The band reappeared and got the crowd pumped with relatively recent hit “One Foot,” to which many fans in the crowd sang along, a great way to set the tone for the night.

Although the band has but two albums in its discography, fun. fans enjoyed a nice, long set featuring almost every track from Some Nights as well as a handful of the most popular songs from Aim & Ignite. The band encouraged crowd participation and sing-alongs to songs like “At Least I’m Not As Sad (As I Used To Be)” and during “Barlights,” more confetti than one could imagine shot out of cannons on the stage, leaving every inch of the floor covered with an inch or more of snow white confetti. Fans were also able to sing back to the band with different memories and experiences in mind during the anthemic “Carry On.”  The band also covered Rolling Stones hit “You Can’t Always Get What You Want,” a wave of nostalgia washing over the crowd for a time when they may have heard their parents humming the classic tune.

Throughout the show, the Ruess and Antonoff admitted to feelings of wondering whether or not they, as a band in a fast-moving and ever-changing music scene, were “washed-up.” However, they confessed that each member of the trio, working hard on their music in different bands for twelve years, could have only hoped for a show like this one.

The band closed their set with the song that launched them into the public eye, “We Are Young,” before departing the stage, the lights going out throughout the venue. By the time they returned for their encore, their faces lit up in response to what Ruess said might have been the coolest thing he’s ever seen, a beautiful array of lights from kids’ cell phone screens, arranged almost artfully like stars thanks to the configuration of the amphitheatre.

The band performed “Some Nights” for encore, Ruess reflecting during the song, “So this is it / I sold my soul for this? / I washed my hands of that for this? / I miss my mom and dad for this?” as he looked out into the crowd, as if to say that it was all worth it. Afterwards, the band closed with “Stars,” an almost poetic ending to an outstanding show.

fun. have always been excellent performers, putting on an incredible show every time they take the stage. Considering this is their final leg of what was once the seemingly endless Some Nights tour run, if you have the opportunity to see this band on the Most Nights Summer Tour, catch them if you can. You won’t regret it, and you’ll have a ton of fun. (By Paula Mirando, photo by Laurel McPherson)