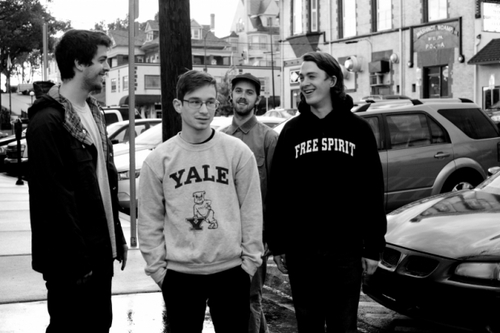 Title Fight recently talked about their Record Store Day experience and doing a split with Touché Amoré. Read it below:

Already Heard: So you’re playing Hit The Deck headlining the Rock City Basement stage later on. How do you feel about that?
Ned Russin: It’s really weird you know. We’ve been coming to Europe for a couple of years now and we kind of realised what the festival season means over here. It’s completely different then anything in the States. It’s really an honour to come to a festival and headline a stage. We’ve never done anything like it before. It’s really cool to come to a festival and be able to do this. It’s our first time at the festival and we’re having a great time so far.

AH: Compared to American festivals, do you feel there is more variation here?
Ned: The whole atmosphere is completely different. A fest like this can happen in the States and it can be smaller with I guess “underground” bands.

AH: Would you say this has more of a community feel to it?
Ned: Yes. Just people come and they’re so used to it. There’s big festivals like Reading and Leeds, they camp out the whole weekend and kids travel from all over the country. In America there’re big festivals like Coachella and people go crazy but then there’re no smaller bands. It’s either huge or nothing, so to have something where you have every kind of genre involved over here is something really cool, and is completely different to the States.

AH: You’re playing the Rock City Basement stage, which is quite an intimate stage. How important is intimacy to a Title Fight show?
Ned: It’s one of the most important things to us. That’s where we grew up playing in places and situations like that and that’s what we’re comfortable doing. We like to be able to interact with people. As far as I’m concerned the best thing about music is that everybody is on the same level. With a big barrier I’m all for safety and for everybody being protected, I’m also just as interested in people to participate and be able to do what they feel like doing.

AH: Record Store Day took place yesterday. You released a split with Touché Amoré for it. How did that come about?
Ned: We’ve known the Touché guys for a little bit now and we did a tour with them when ‘Shed’ came out in the States and then Australia. Over that couple of months we became close friends with them. We were approached by them some time last year and they said “we’re going to do a bunch of splits, would you like to do one with us?” We agreed and then came up with the idea of covering one of each others songs. It took a little bit to come together but we were happy to be part of it.

AH: What are your thoughts on the Record Store Day concept?
Ned: I think Record Store Day is a really cool thing. There is apart of me that thinks it sucks there has to be a Record Store Day and that people don’t support their local record store as much as they used to in the past. There’s no point in beating yourself up over that, so I’m more than happy there’s an event that gets people out and recognising there are record stores in their town that carry cool things.

AH: I went to a store here in Nottingham yesterday and its good to see people queuing outside and actually buying music.
Ned: Yes because it’s so easy to sit at a computer and not do anything. I think the record store is so important to music. Record Store Day is a great event and we’re happy to be part of it.

AH: Would you consider taking part in Record Store Day again?
Ned: This is the first time we were ever able to release a record apart of it. We’ve talked about it in the past and we’ve wanted to be involved in it but its never came to fruition.

AH: After Hit The Deck you’re off round Europe with Dead End Path and Whirr. Are they friends of yours?
Ned: Yeah they are.

AH: How important is it having friends on tour? Does it make it better being on tour?
Ned: We like to tour with any bands we like and it makes it even better when you’re friends with them. It makes it so much easier and the whole energy and emotion is positive. It’s easy going and happy. When you get time to spend with your friends compared to people you’re just getting to know, its more fun. I’m not saying that touring with bands we’ve never met before wasn’t fun, but in this situation being so far way from home and being with people (you know) is more comfortable.

AH: This is your first time back in the UK since the London show with Make Do and Mend last September. What have you been up to since then?
Ned: We did a headliner in the States shortly after that tour, then a tour with Quicksand, then at the beginning of the year with Texas Is The Reason. Last month we did a foreign tour; New Zealand, Australia, Hawaii and Japan. So we’ve just been touring a lot, it’s been a lot of fun.

AH: Have you been writing lately?
Ned: Yeah we’re always kinda writing. We’re taking it slow. We don’t want to force anything. We’re really happy with how ‘Floral Green’ came out and we’re happy to play those songs for a little while longer. We’re taking it easy. When we practise we write if we have an idea or just practise the songs we’ve been playing.

AH: There was a short gap between ‘Shed’ and ‘Floral Green.’ Do you aim to have a longer gap this time?
Ned: I really like how we went about things but at the same time we worried about the feeling that people thought we weren’t happy with ‘Shed’ and wanted people to forget about it, so we’re going to do a new record. That wasn’t the case, it just so happened our schedule allowed us to do a new record real quick. This time our schedule allowed us to play more shows on this record, so we’re just going to keep playing shows until its time.

AH: I think it’s good to show the progression between ‘Shed’ and ‘Floral Green.’ It wasn’t clearly evident but you could tell it was there when you heard the album.
Ned: Like I said its important to us when we write so the fact it comes across is good.

AH: I feel songs like ‘Head In Ceiling Fan’ may have been slightly alien to some compared to previous material. It shows you’re evolving.
Ned: Yeah. We don’t want to be pigeonholed into any one thing, so we always try our hardest to break down any barriers that we may have formed.